We are very excited about the upcoming 2022 season. Player registration has been overwhelming. 195 children have signed up to play this season compared to 96 in 2021. Unbelievable !!

As a result, putting team rosters together and setting a final schedule for teams got delayed but we are back on track and will announce them shortly.

Please put these dates and events on your calendar. We are looking forward to seeing you at the field this year to watch these children experience playing the game of baseball.

Bill Schultz grew up playing baseball in a corner lot with his friends. At 8, he tried out for Little League but was turned away because organizers thought he could further injure himself or others — his right leg had been amputated shortly after birth and his left arm was not fully developed.

Despite the Little League setback, Schultz’s parents encouraged him to pursue his sports dreams. He learned how to golf, bowl and swim. “That allowed me to do so many things in my life,” Schultz says. “[Playing sports] built my self-confidence to interact with other kids, to overcome snickering and build resilience.”

One day while watching TV with his wife in 2018, Schultz learned of the Miracle League, a national organization supported by MLB that gets kids with a wide range of disabilities involved in baseball. The organization already had leagues in Appleton, Milwaukee, Kenosha, Eau Claire, La Crosse and Green Bay, but not Madison. Schultz told Miracle League he might be the guy to bring adaptive baseball to the area. The next step — and what he was told would be the hardest — was finding land in Dane County.

Miracle League of Dane County ended up finding space in Cottage Grove’s Bakken Park. Fundraising was slow during the pandemic until an anonymous couple provided a matching donation of $120,000 and another $120,000 for operating expenses. The organization ultimately raised more than $500,000 to build a rubberized field for wheelchairs and walkers with ground-level dugouts, bleachers and fencing.

Games took place twice a week with fans in the stands — by the fifth week of the inaugural season, each game had 200 to 300 spectators. A video scoreboard displays the batter’s number and photo and plays their favorite song as they approach the plate. Because of the affiliation with the MLB, the players get to wear official Brewers, Yankees and other team jerseys and caps.

Players, who range in age from 5 to 18, come from all over Dane County and beyond. Each player gets to bat each inning and there are two innings per game. They use a hard foam ball and bat. Volunteers, who are called buddies, are always on the field with players to assist with whatever a player may need — which benefits them, too. “There’s a bond that’s built, a friendship that’s built with these kids,” Schultz says.

According to Schultz, the transformation for players, their families and the communities is immediate.

“I saw kids play this summer with autism that didn’t know how to hold a bat,” Schultz says. “By the end of the summer they were swinging and feeling comfortable.”

Miracle League of Dane County is gearing up for a new season and working to raise funds to add field lights that will allow for more youth and night games.

Read about more adaptive sports in the Madison area here.

See the full article on Channel 3000

Home run for children with disabilities 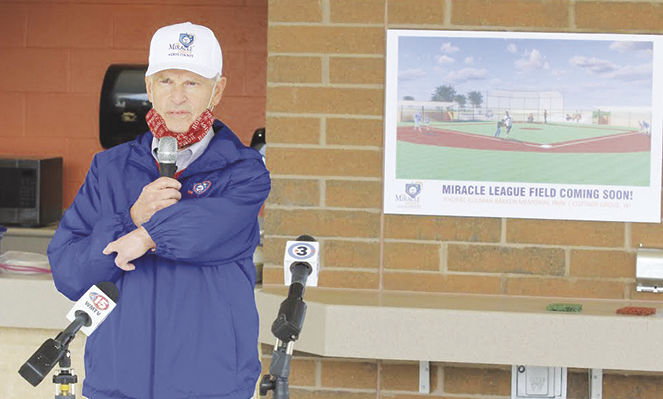 As a nine-year-old baseball fan growing up in New York state, Bill Schultz couldn’t play the game at the Little League level. His right leg was amputated at birth and his left arm and hand had deformities.

Decades later, while watching television, Schultz learned of a group called the Miracle League that builds baseball diamonds equipped for children with mental and physical disabilities. He went to the organization’s office in Atlanta, and from there, the idea to construct a facility for children with disabilities took off. The baseball diamond could open at Bakken Park in Cottage Grove in the late spring or early summer of 2021.

An October 14 groundbreaking ceremony provided village residents with information on the project and how it will benefit Dane County children who have not been able to play sports.

Schultz, now the executive director of the Miracle League of Dane County, said he expects 80 to 100 children to participate in the first year with the second year having better than 150 kids.

“We have had tremendous response from groups such as the Autism Society, Down Syndrome Society and other Dane County youth services,” Schultz said.

Greg Sweeney, a retired contractor from the Findorff Corporation who is donating his time on the project, said a four-inch concrete slab will be laid out at the construction site and on top of that, a rubberized surface will be installed that will make it easier for children in walkers and wheelchairs to navigate the playing surface.

After that, a fence will be put up around the perimeter of the field along with a backstop, and then work will begin on the dugouts and bleachers. To prevent players from tripping, the bases, baselines, pitching mound and home plate will be installed at the playing surface level and not protrude above ground.

The Miracle League has raised $360,000 with the fundraising effort boosted by an anonymous donor who recently provided a matching donation. The group hopes to raise another $60,000 to build a scoreboard and other amenities. Cottage Grove Village Council President John Wiliams said the project took a few months to go through certain committees before it was given the green light.

“The reaction has been super positive. Everyone is excited about this mission throughout Dane County,” Williams said. “Next spring is going to be an exciting time for players to come out to Cottage Grove and play on this field.”

The Miracle League has overseen the construction of 300 disability-friendly baseball fields in the country. Currently, Milwaukee has the closest facility to Madison.

The baseball players will be assigned volunteers who will help the children make their way around the bases, to the pitching mound and the batter’s box.

“There is really not a defined boundary for what these kids can do,” Schultz said. “Parents see kids smile, have joy in their faces, make friends and build self-confidence. This is a tremendous thing happening here.”

The Miracle League of Dane County is creating the little-league size diamond at Bakken Park. It’s specifically designed for people with physical and cognitive disabilities. Volunteers will help players navigate it.

So far the groundwork for the field is complete, and there’s a second phase of construction planned for the spring.

“One of the things that’s great about this is it allows kids with disabilities to experience the game of baseball,” said Bill Schultz, Executive Director of the Miracle League of Dane County. “But it’s more than just baseball – it’s an opportunity for kids to be included in something, be encouraged and build their self-confidence.”

Schultz says it’s also an opportunity for volunteers to interact with children who inspire them, and for parents to see their children experience joy, laughter and fun.

Fundraising for the project has been going on for about a year, and the Miracle League has almost reached their goal. There’s a matching gift happening now for up to $120,000.

Opening day is scheduled for the beginning of June. Updates about how to register for the league will be posted online in the winter at danecountymiracleleague.org.

MADISON, Wis. — The Miracle League is coming to Dane County and we are looking forward to it.

The Miracle League is a national organization that helps communities build baseball fields and programs designed specifically for children with disabilities. There are over 300 Miracle Leagues in the country all locally managed and independently financed.

Bill Schultz is the executive director of the Miracle League of Dane County. Schultz gets it. Living with physical disabilities as a child he experienced first hand the barriers to playing baseball, a game he loves. The Miracle League removes those barriers enabling children with disabilities, both physical and cognitive, to play ball, feel included and accepted and build self-confidence.

Schultz is raising money to get the nonprofit up and running on a parcel of land that’s been donated in Cottage Grove. He’s got a good start but could use some help. It’s a great project. The website is www.Danecountymiracleleague.Org.

This week in the booth, Jonathon sits down with Bill Schultz, executive director of The Miracle League of Dane County, to talk about his mission to make baseball accessible to every child.
You can check out The Miracle League here: www.danecountymiracleleague.com/

Television Interview on WISC-TV and Channel 3000 in Madison

Radio Interview with Mike Powers on Life 102.5 FM in Madison

NPR Radio Interview on “The Larry Meillor Show” in Madison